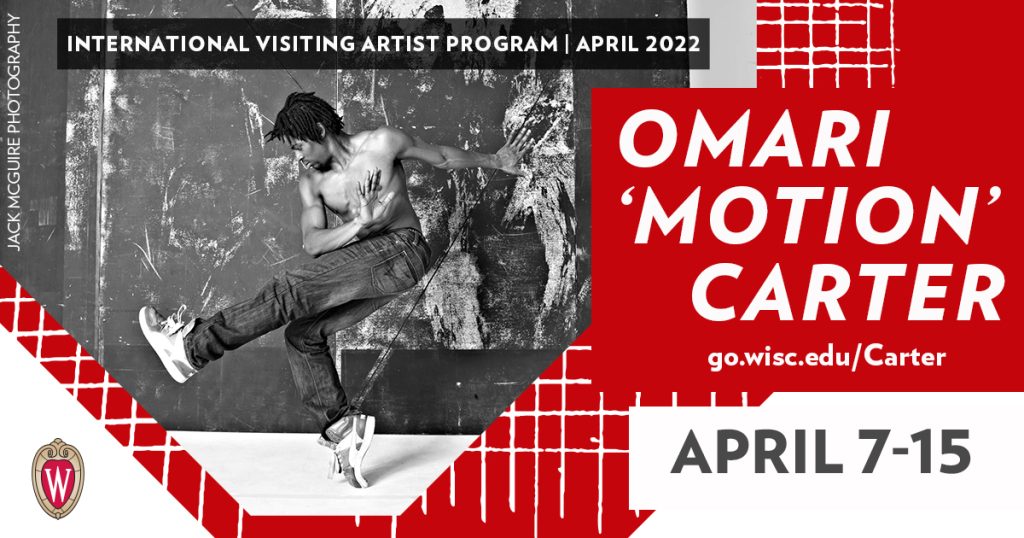 Omari ‘Motion’ Carter is a screendance practitioner, lecturer and body percussionist based in London and, for the past decade, has been choreographing, teaching and performing for music videos, film, television and theatre. He is the Founder and Creative Director of The Motion Dance Collective and lecturer in Dance at London Contemporary Dance School. Omari’s practice is influenced by hip hop dance culture, screendance and body-percussion. The recipient of international awards for his work in screendance, Omari’s multi-faceted, dance-filmmaking experience results in the purposeful creation, presentation and education of narratives told through dance and the camera.

Omari’s residency will include participation as a presenter at State of the Art: the 2022 International Symposium on Screendance (April 10–13, 2022), a guest filmmaker at the Wisconsin Film Festival (April 7–14, 2022) and a teacher, leading workshops in professional development and exploring elements of dance “Animation” (a subgenre of Popping) and body percussion.

Saturday, April 9, 2022, at 5:15 p.m.
In Pursuit of Joy: A Screendance BBQ in Movers and Shakers, Wisconsin Film Festival

In Pursuit of Joy: A Screendance BBQ, a film by IVAP artist Omari ‘Motion’ Carter, will be presented during the 24th annual Wisconsin Film Festival’s shorts block titled Movers and Shakers on Saturday, April 9 at 5:15 p.m. The screening will be followed by a Q&A with attending filmmakers featured in the block. Tickets may be purchased in advance or day-of.

In “Urban Tones: Expanding Animations,” a workshop with IVAP artist Omari ‘Motion’ Carter, participants will explore elements of the dance form “Animation” (a subgenre of Popping). From Slow-Motion to Ticking, Gliding and isolations, this workshop will explore how these ways of moving can be expanded upon to develop narrative and character-driven dance performance. Going beyond the technique, the session fuses pedestrian action, character work and animation dance conventions to explore how these dances, influenced by animated stories on screen, can be the starting point for telling stories for all styles of movement makers. “Urban Tones: Expanding Animations”  takes place during Dance 455 – Dance Composition III on Monday, April 11, 12:30–2:10 p.m. in 349 Lathrop Hall. Open to students and International Symposium on Screendance attendees of all styles and abilities. Shoes will be removed to participate.

In “Body Percussion Possibilities,” a workshop with IVAP artist Omari ‘Motion’ Carter, participants will work with the rhythmic body. This session will introduce participants to the art of body percussion in an aim to bridge the gap between dance and musical language. Participants will explore rhythmic techniques from across the globe (Brazil, America, South Africa, UK), stimulating an awareness of the body, control of movement and muscular strength, coordination and balance.

Exercises, warm ups and games will help improve concentration, perception and memory alongside musicality, composition, listening and ensemble work. Participants will gain practical experience with tools that inject an essence of hybridity, musicality and joy into their ongoing practice. The workshop convenes during Dance/Theatre 259 – Collaborative Arts Performance Lab: Devising Collaborative Performance Through Hip Hop Arts on Tuesday, April 12, 3:30–5 p.m. in 249 Lathrop Hall and is open to UW students.

Wednesday, April 13, 2022, at 11 a.m.
“What is Urban Dance on Screen” at the International Symposium on Screendance

Omari ‘Motion’ Carter, presents ”What is Urban Dance on Screen” on Wednesday, April 13 at 11 a.m. in  the Margaret H’Doubler Performance Space, Lathrop Hall. In his presentation, Omari draws from his postgraduate study which focused on dances within hip hop culture and their relationship to narrative. Additionally, Omari will explore the label of “urban” within a screendance context. As a hip hop dance culture aficionado studying under the roof of a contemporary dance school, Omari was concerned about who his research was going to reach. If his research hopes to be an academic contribution to hip hop culture, will any hip hop practitioners outside of academia actually read it?

Omari will screen his video essay created during his study at the world’s first Master’s Degree in Screendance program. “What is Urban Dance on Screen” is a musical and spoken word provocation that mixes video references with academic prose, resulting in a piece of academia that aims to bridge a gap between the writers and the makers. Could the video essay format be further utilized to diversify how we academize screendance practice in the future? 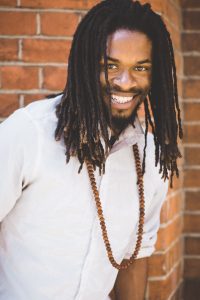 Omari ‘Motion’ Carter is a screendance practitioner, lecturer and body percussionist based in London and, for the past decade, has been choreographing, teaching and performing for music videos, film, television and theatre. A first-class BA (Hons) degree in Performing Arts at London Metropolitan University led Omari to perform for 7 years (2011–2018) in the West End and international touring productions of Stomp!. During this time, Omari choreographed, directed, performed and produced a varied reel of dance-film work with screendance production company The Motion Dance Collective, which he founded in 2011.

As an independent choreographer and dancer, Omari has created works for Google, Britain’s Got Talent, Weetabix, Stanton Warriors, Greenpeace UK, Diabetes UK and ADAD (Association of Dance from the African Diaspora).

A graduate from the world’s first Master’s Degree in Screendance program at London Contemporary Dance School (LCDS), Omari went on to become associate lecturer in screendance at the University of East London, University of Lincoln and LCDS. Most recently Omari was co-curator of Akademi Dance-Film Festival 2021, Digital Creative for Pavilion Dance South West, on the event programming team for San Souci Festival of Dance Cinema (U.S.) and features twice in Vol. 12 of The International Journal of Screendance, which was released earlier this year.

The Motion Dance Collective (The MDC) is an award-winning screendance production company founded by Omari ‘Motion’ Carter in 2011. Since its beginnings, The MDC has gained worldwide recognition as a production company that produces thought-provoking dance-films to tell relevant stories through the hybrid practice that is screendance. With work screened across the UK and internationally at over 60 film festivals, including Loikka Dance Film Festival (Helsinki, Finland), Cinedans Dance on Screen festival (Amsterdam, Netherlands), British Urban Film Festival (London, UK), Lightmoves Festival of Screendance (Limerick, Ireland) and the San Francisco Dance Film Festival (U.S.), to name a few. The MDC’s purpose is to innovate the dance-film production process, present audiences with thought-provoking dance-on-screen narratives and engage artists with playful and educational digital-dance workshops. From concept through to delivery, we are UK’s leading company that produces bespoke content for organizations and artists who have an interest in bridging the gap between moving body and moving image.