The University of Wisconsin­–Madison Division of the Arts is changing the name of the Interdisciplinary Arts Residency Program (IARP) to Interdisciplinary Artist-in-Residence Teaching (IART) program starting in July 2021. The program provides students with extended learning experiences with a working artist and increases diversity of teaching staff on campus. It also strengthens programmatic ties among individual departments, programs and other campus and community arts entities. While in residence, artists present workshops and public events, participate in community outreach and teach an interdisciplinary course culminating in a final presentation of student work from a wide range of majors.

The residencies will move from semester-long to almost a full-year starting in the summer of 2022 with the future IART artist teaching and living in the Madison region in the spring of 2023. Leading up to teaching their course, the artist will connect with campus and community, including hosting workshops for students and public events. The calls for a future IART artist are open until Monday, September 13 at 5:00 p.m. CT (deadline extended). The interdisciplinary artists are nominated by a faculty or staff residency lead at UW­–Madison. The lead works with campus units and departments and possibly community organizations to develop partnerships that will ensure broad support for and extend the reach of the residency.

Each interdisciplinary artist-in-residence teaches at least a 3-credit course and participates in campus and community outreach, including free public events. Many of the interdisciplinary artists also connect campus to their own professional networks by bringing in guest artists to teach or perform on campus and in the community. Applications will be reviewed by DotA’s Academic Affairs Committee in May and the incoming artist-in-residence will be announced in the summer of 2021. The residencies are supported by the Office of the Provost through their Cluster Hire Initiative. 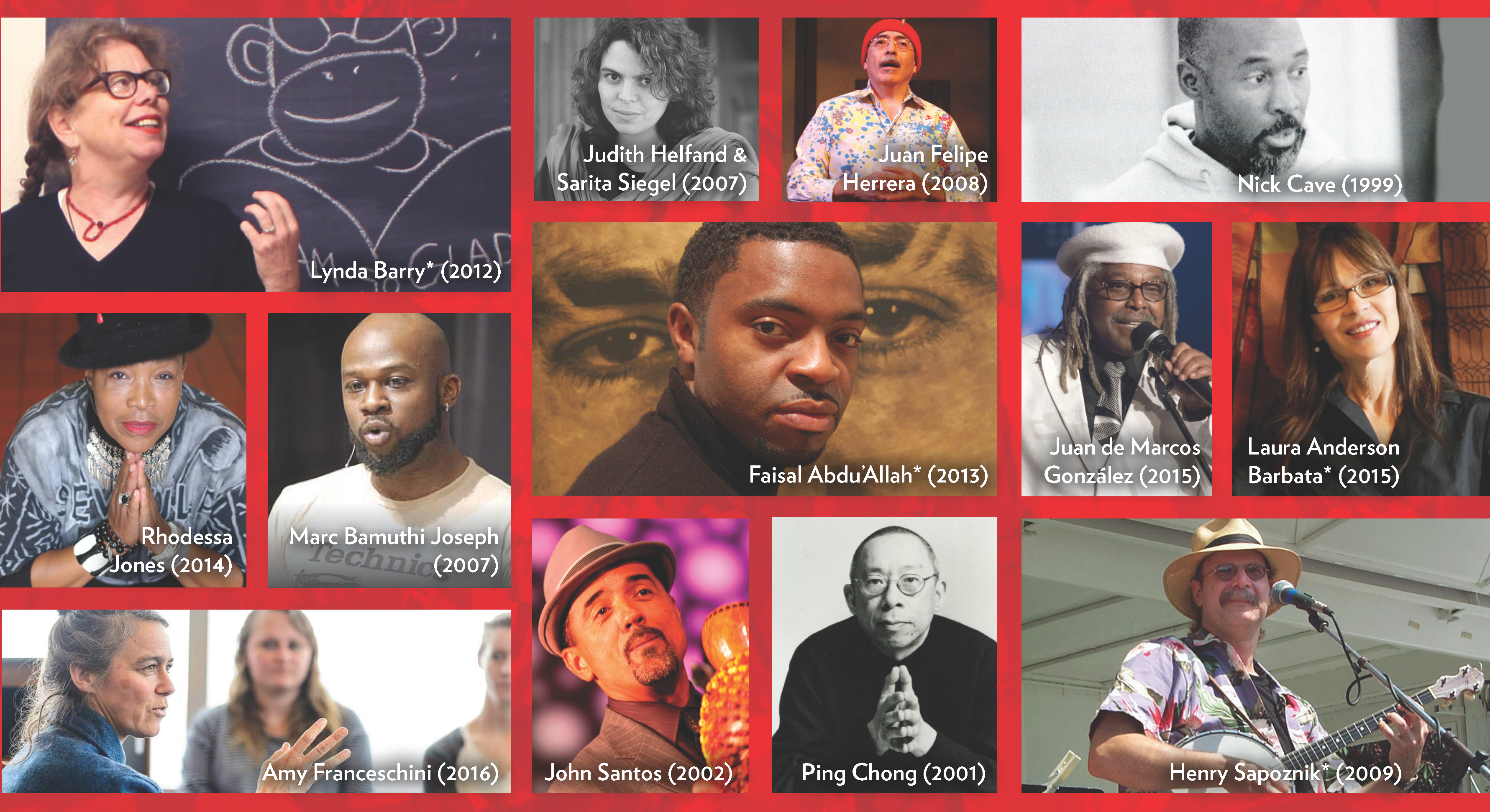 In 1995, Meredith Monk was the division’s first interdisciplinary artist-in-residence and the program officially launched in the fall of 1999 with world renowned multi-media artist Nick Cave. The strength and power of this unique program nationwide continues to benefit and positively impacts the university community and beyond. To learn more about previous artists and residencies, follow these links:

In addition, Litza Bixler is the current IARP artist. The interdisciplinary artists-in-residence for the next academic year are Arun Luthra in fall 2021 and Judy Frater in spring 2022.

“We have had numerous impactful residencies in the semester-long format, though many artists have wanted to expand their collaborations over a longer period of time,” said Heather Owens, UW–Madison Interdisciplinary Arts Programs Manager.” The semester-long residencies are intense and don’t always allow the artist, the students and supporters to make as many connections as they would like. This new format will allow future artists, especially those focused on building community, to achieve new levels of engagement and outreach.”

A key achievement of the Interdisciplinary Arts Residency Program has been the long-lasting impacts of the artists and their residencies. Some of the more notable examples include:

Marc Bamuthi Joseph was integral to the creation of the Office of Multicultural Arts Initiatives’ First Wave Hip Hop and Urban Arts Learning (First Wave) scholarship program. The annual campus Line Breaks performance festival was first produced and presented by Marc Bamuthi Joseph during his residency. He also returned virtually to campus for OMAI’s Passing the Mic in October 2020 and was on a panel with Michele Byrd-McPhee (fall 2020) along with her guest artist Ursula Rucker and lead faculty, Assistant Professor Duane Lee Holland, Jr. in the Dance Department.

Activist, composer, and baritone saxophonist Fred Ho passed away in 2014, however his mentee Ben Barson (also a baritone saxophonist) was one of the interdisciplinary artists-in-residence in spring 2020 along with partner Gizelxanath Rodriguez. Barson and Rodriguez, co-founders of the Afro-Yaqui Music Collective, worked with Fred Ho on a regular basis and were strongly influenced by his activism. Barson also wrote a chapter in the book “Black Power Afterlives: The Enduring Significance of the Black Panther Party” about Fred Ho. Associate Professor Peggy Choy of the Dance Department, was the lead faculty for both residencies.

Sapoznik taught “Yiddish-American Popular Culture 1890-1950” as part of his residency. UW–Madison was the first higher educational institution to teach Yiddish starting around 1915. The Mayrent Institute for Yiddish Culture was formed in 2010 thanks to a  donation of a large collection of original 78’s and the establishment of an endowment by Sherry Mayrent, a long-time supporter of Sapoznik’s work. Sapoznik served as Mayrent’s director for numerous years.

Professor Lynda Barry strengthened the use of comics, cartoons, graphic novels at UW as an artistic practice and form of research. Since her residency, numerous UW organizations and artists have used the art form of image making to communicate ideas, demonstrating its importance and relevance in research. Barry was hired as the faculty in the Art Department in 2013 and has taught and led many workshops on campus and in the community including at the Wisconsin Institute for Discovery. She was named a MacArthur Fellow in 2019.

Professor Faisal Abdu’Allah was hired as faculty member in the Art Department in 2014 and was selected as the next recipient of the Chazen Family Distinguished Chair of Art this year. Besides teaching and his numerous awards, Abdu’Allah has been the Faculty Director of The Studio, a creative living and learning community, since 2017. Many of the interdisciplinary artists-in-residence lead workshops for The Studio residents each year. He was also the lead faculty for S. Ama Wray’s residency in spring 2018.

Digital media artist and filmmaker Alex Rivera’s residency was hosted by the Nelson Institute for Environmental Studies. The faculty lead was Gregg Mittman who also managed the Tales from Planet Earth film series. For many years, the Nelson Institute and the Division of the Arts (and formerly Arts Institute) have worked together on a wide range of environmental art activities including the IARP program with recent artists Carrie Hanson in fall 2019 and Ben Barson and Gizelxanath Rodriguez in spring 2020.

After Laura Anderson Barbata’s residency, she became a fellow of Latin American, Caribbean and Iberian Studies (LACIS) program and has presented her work to campus audiences numerous times. Some of Barbata’s students were involved with “Intervention Indigo” along with her long-term collaborator Professor Chris Walker in the Dance Department. Barbata and Walker have also worked together on projects together such as “Oceans Rising,” which was presented as part of the UN Oceans Conference in 2017 along with the traveling exhibition “Intervention Indigo.”