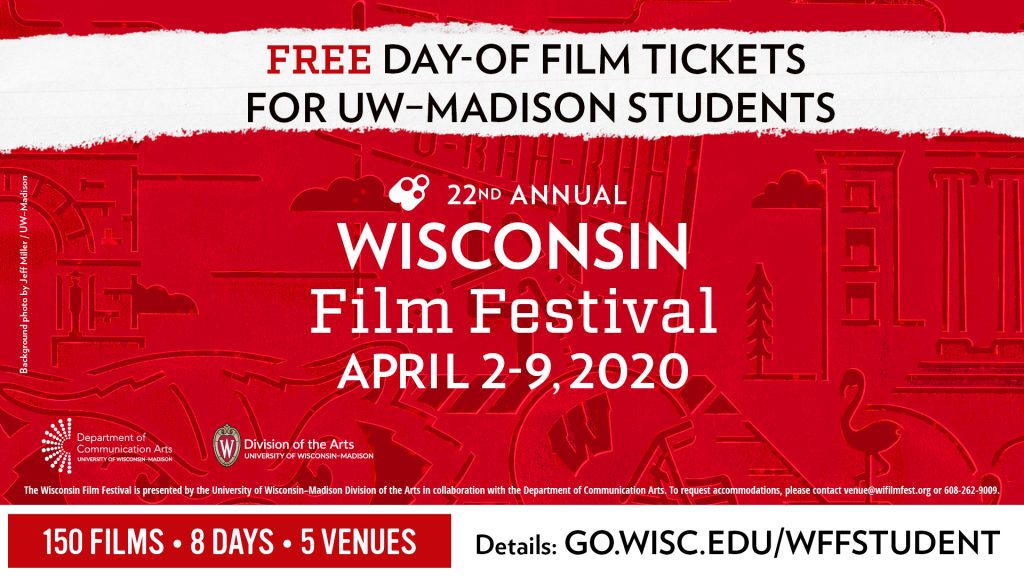 New for 2020, every current University of Wisconsin­–Madison student, with a valid WisCard, is eligible for one free ticket to every screening at every Wisconsin Film Festival venue all festival long, based on seating availability. This year’s Wisconsin Film Festival runs from April 2-9, 2020 in Madison and is the largest campus-produced film festival in the nation.

The list of 150 films will be available online at 2020.wifilmfest.org and in the printed guide of the Isthmus on Thursday, March 5. General information is currently available on the website.

Per Kelley Conway, Artistic Director of the Wisconsin Film Festival and Chair of the Department of Communication Arts, “Every year, UW–Madison puts on an amazingly successful film festival. The Wisconsin Film Festival brings the best of contemporary global cinema to campus theaters and to AMC Madison 6. We want students to be a bigger part of this awesome event, so we’re pulling out all the stops and offering free admission. Bring your UW­–Madison student ID, grab some friends and watch a great film for free!”

For example, a student could get tickets to films that still have available seats at Shannon Hall, Memorial Union on Saturday, April 4 by visiting the ticket table before showtime on that date. If they want to see films at other venues that day, they would have to go to those venues’ respective ticket tables.

The Wisconsin Film Festival is presented by the UW–Madison Division of the Arts in collaboration with the Department of Communication Arts and was established in 1999. As the largest campus-produced film festival in the nation, it is known for its diverse film offerings including American independent, international cinema, documentaries, experimental and avant-garde, restored classics, Wisconsin’s Own and children’s cinema: Big Screens, Little Folks.