The Tuesday Night Movie Club begins 2018 with two dark European dramas. Both will be screened on 35mm at the Marquee Theater at Union South.

On January 16, we present the Spanish mindbender “Timecrimes,” which lit up the Orpheum at a midnight screening during the 2008 festival. This thrilling, twisty time-travel puzzle-box is an absolute must for fans of “Primer” and WFF 2014 favorite “Coherence.” “Timecrimes” writer/director Nacho Vigalondo continued to revamp genre cinema with last year’s monster mash “Colossal.” In Spanish with English subtitles. 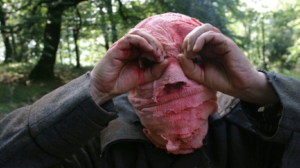 Hector is relaxing on a lawn chair outside of his new country home, surveying the nearby hillside through a pair of binoculars, when he catches sight of what appears to be a nude woman amidst the trees. Hiking up to investigate, he is attacked by a sinister figure whose head is wrapped in a grotesque pink bandage. Fleeing in terror, he takes refuge in a laboratory atop the hill, where a lone attendant (played by the director) ushers him in to a peculiar scientific contraption. He emerges what seems to be moments later, only to find that he has traveled back hours in time, setting in motion a brain-twisting, horrifying chain of events when he inadvertently runs into himself. Drawing from the best traditions of classic science fiction and crime fiction, “Timecrimes” plays games with the genre and the audience, giving the protagonist a Russian-doll like shell of identities that are shed so often that Hector can be playing one of any number of whodunit archetypes at any given moment as he becomes increasingly more complicit in the complicated mess that he’s trying to fix. 2008 Sundance Film Festival; Winner, Audience Award and Best Feature Jury Prize, 2007 Fantastic Fest.

On February 6, Samantha Morton stars in “Morvern Callar,” from WFF 2003. Directed by Scottish auteur Lynne Ramsay (“Ratcatcher” and “We Need to Talk About Kevin”), this mesmerizing cinematic experience boasts an unbeatable soundtrack featuring everything from Can to Ween.

A young working-class woman escapes a dreary life as a grocery clerk with the help of an unexpected gift from her boyfriend.

Films begin at 7:00 pm at the Marquee Theater at Union South. The final Tuesday Night Movie Club screening will take place on March 6. The Marquee at Union South is the home venue for all Tuesday Night Movie Club screenings. The Marquee, a popular festival venue, provides easy access to food, drink, popcorn and other snacks available at The Sett, Urban Slice, Badger Market and Daily Scoop. Come early, and stay afterwards.

Tuesday Night Movie Club is co-presented by UW–Madison Arts Institute, Department of Communication Arts and WUD Film, with support from the UW–Madison Brittingham Trust.