As part of both the American Visions and the Wisconsin’s Own series, The 60 Yard Line (The 60) makes its world premiere at the University of Wisconsin–Madison’s Wisconsin Film Festival (“Festival”) Sunday, April 2 at 7:00 p.m. at the Barrymore Theatre (2090 Atwood Ave, Madison).

Slated to attend are the film’s director Leif Gantvoort and screenwriters Ryan Churchill and Nick Greco, all of whom also appear in the movie. A Q&A and a few special surprises are scheduled as part of this highly anticipated world premiere. In less than a week of ticket sales, “The 60” has sold all of its advance tickets (over 700) and is now considered a “rush-only” film. This year’s Festival runs March 30-April 6, 2017.

According to Churchill, “It’s very important to us that we bring The 60 directly to the heart of our target market and we couldn’t be more pleased to do so at Wisconsin Film Festival. Being originally from Beloit, Wisconsin and a graduate of UW–Stout, I’m excited to be able to bring my work in Los Angeles back to the best state in the country. I’ve never really thought of The 60 as ‘my film’, I’ve always thought of it as ‘your film’, meaning a film that belongs to Wisconsinites. A film that you all can show to your friends and family and say, ‘that’s me! I do that…’ or ‘This is what we’re about!’ … what better way to introduce it to the world than in Madison at the Wisconsin Film Festival.” 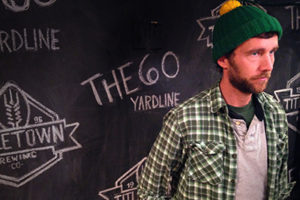 A romantic comedy, a heartwarming bromance, a dark exploration of the relationship between booze and Midwestern sports mania, a bawdy frat-boy fantasy come to life, a sly meditation on putting aside childish pursuits in favor of mature choices…”The 60 Yard Line” is all of these things and more, but who are we kidding? Most importantly it’s the movie that’s sooooo Wisconsin, it just had to have its world premiere here at the Wisconsin Film Festival – nothing else would have made sense.

This Green Bay Packers obsessed tale of life, love, and Lombardi, written and performed with comic aplomb by Ryan Churchill and Nick Greco, tells the story of a guy who takes his wedding fund money and buys a house next to Lambeau Field, where he can party hard, be a stone’s throw from the team he loves and compile stats ‘til the cows (literally) come home. Filled to the brim with amusing ‘Sconnie-centric one-liners, charming Packers cameos (including Mark Tauscher and John Kuhn) and shot on location in glorious Green Bay, “The 60 Yard Line” is a rowdy, raucous, crowd-pleasing romp that will leave football and film-loving cheeseheads shouting “Lights, Camera, Touchdown!” Film description by Ben Reiser.